Do you have any questions or concerns? Contact Katie Buhts at 502-767-7974 or cityclerk@cityofriverbluff.com for assistance!

Ongoing leaf removal service is available until Mid-December. Please rake leaves curbside and Turner Lawn Service will remove piles on a weekly basis. If you have any questions, contact Katie Buhts at 502-767-7974 or via email at Katie.Buhts@cityofriverbluff.com.

The agenda can be found here. 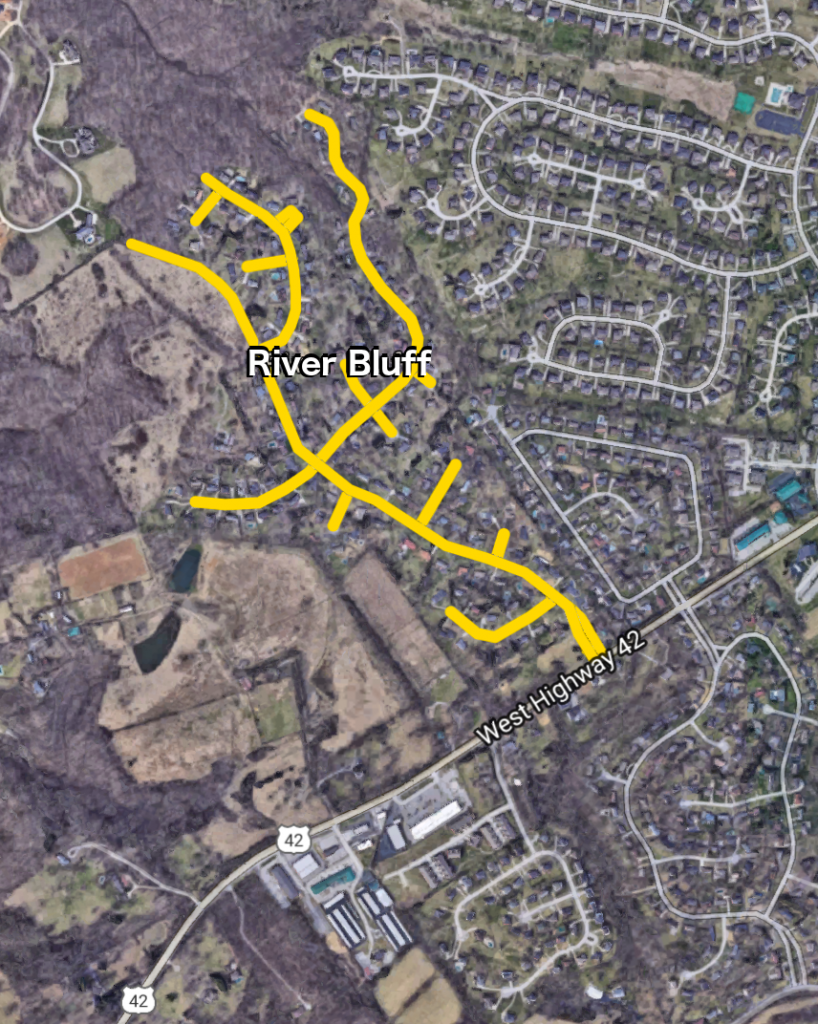 Please note that all City Notices are published in the Oldham Era.

A Brief History of the City of River Bluff

In the late 1970’s the residents of what is now known as the City of River Bluff realized that our roads were in deplorable condition and upon investigation on both the county and state levels it was learned that our roads were private and it was our responsibility to repair and maintain them. The previous winter had been an especially harsh one and the roads were in shambles as a result of the freezing weather.

In order to begin the process of repairing the roads, a Homeowner’s Association was formed to collect the necessary funds from the residents and possibly from the county and state.  It was soon discovered that the roads had not been built according to county standards and much work was necessary.  As a Homeowner’s Association, we had no legal standing and no support from the county or state.

For several years the members of the original association worked to get the roads back in shape, arranged for garbage pickup and worked with other ideas to improve life in our subdivision. It became clear that in order for River Bluff to gain legal standing and qualify for state revenue sharing and for residents to be able to claim expenses paid as personal, federal, and state tax income tax deductions, it was necessary to replace the Homeowner’s Association with another form of government.

By one description our City could be called a  “Gentlemen’s Agreement.”  It was formed in order to accomplish actions necessary for maintaining common property. Over the years the City Board has negotiated garbage pickup, installed lighting, signage, improved drainage, acquired cable television, installed gas lines, and made many other improvements. The original intent was never to govern by passing laws and restrictions, but rather maintain a quality standard of living by acting as good neighbors, respecting the property of others, and having pride in our community.

Please note that the Resident Directory is offline until the all current resident information has been updated. We apologize for the inconvenience and hope to have the updated directory online as soon as possible.